In April last year, BMRA member Sackers found a safe with bundles of cash in it after cutting it open with a snipping tool. 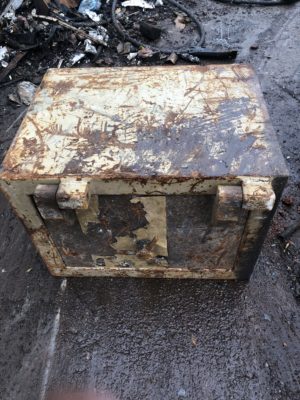 There was no record of which customer brought the safe in, or where the money came from, so it was handed in to the police in. After a few months of investigation, the police confirmed it wasn’t proceeds of crime or that it hadn’t been recorded as missing. Once the investigation was over, Sackers went to court to ask for the money to be returned to them to give to local charities. The cash was a mix of old tender and current tender, some of which was damaged.

The money has been split between EACH Children’s Hospice, a charity the business has supported for many years and St Elizabeth Hospice, Sackers chosen charity for 2020 after signing up to its 30th Partner scheme.

The final total after invalid money was removed was £14,416 with Sackers rounding the donations up to £8,000 for each charity.

Adrian Dodds, Joint MD, Sackers said, “The money was never ours in the first place so there was no question it had to go to charity. We fought to get it back because we wanted to keep it locally invested for the benefit of Suffolk”.

David Dodds, Joint MD, Sackers said “We have supported EACH for many years and it was one charity we wanted to ensure had half of what was in the safe.  The other half goes to another fantastic charity, St Elizabeth Hospice. It completes our partnership off nicely. It was important to us that the money stayed local”.

Harriett Warriner, EACH Matron said, “This wonderful and unique donation has been so well received by everyone at EACH. Sackers’ extraordinary find and even more extraordinary generosity has also captured the imagination of both the media and the public – helping greatly with our awareness raising too! We rely so heavily on voluntary donations to deliver our services and donated treasure like this really does make a significant difference to local children, young people and their families.”

Director of Income, Hannah Bloom from St Elizabeth Hospice added, “What an incredible find, we are very grateful to Sackers for choosing to make such an incredible donation to St Elizabeth Hospice.  At the hospice, we aim to improve the lives of people living with progressive and terminal illnesses.  Each year we provide care and support to over 2500 local people and their families.  We are passionate

about ensuring there is no charge for our services, and we rely on the support of the local community and businesses in order to enable us to continue to do this. Thank you”.

Timeline of activity:
March (roughly) 2019: The safe was brought in
April 2019: The safe was cut open alongside 5 other safes
April 2019: Sackers handed the money to the police
April 2019: December 2019: Police investigated the money and put a press release out for the owner to come forward and claim it.
12 December 2019: Sackers went to court to ask for the money back so it could donate it to its chosen charity.
February 2020: The money was returned to Sackers
5 March: Presentation and donations were given to the charities

The value recorded by the police in the safe which was cashed by the bank was in the below denominations:

Sackers has been 30th Partners of St Elizabeth Hospice since 2019 and as part of this fundraising, Sackers also had St Elizabeth branded skips for hire. £20 was given to the charity for the hire of each skip.

Sackers keep safes until there is a few to process at one time. This is because they aren’t easy to process.  It is a messy job as they are filled with sand so once they are processed there is a lot to clear up.  This particular safe had been sitting in the yard for a couple of weeks before it was cut up along with 5 other safes. Skips have to be cut open or they explode from the air inside them when they are smelted.