Huntingdon, Cambridgeshire, UK - 3 March 2022: Ahead of Global Recycling Day on 18 March, the British Metals Recycling Association (BMRA) is delighted to announce its support of the 2041 ClimateForce Antarctica Expedition 2022, further raising awareness of metal recycling’s contribution to the earth’s sustainability and the UK achieving a net zero society by 2050 as announced at COP26.

The 2041 ClimateForce Antarctica Expedition 2022’s aim is for participants to be equipped to educate others on the urgency of the current climate crisis through leadership development, up-to-date climate change training, and sustainability education. Flying the flag for the BMRA is Cambridgeshire-based Caroline Marriage, who joins participants from around the world during the expedition which takes place between 17 – 28 March 2022.

Caroline said: “The expedition is a unique opportunity to learn from experts in the world of climate change and sustainability whilst seeing first-hand the impact of climate change on the landscape and wildlife of Antarctica: the last untouched piece of the globe.”

James Kelly, CEO, BMRA said: “Given that metal is 100% recyclable and a permanent resource, its contribution to lowering emissions and the journey to net zero is unmatched. It contributes to the circular economy, avoiding landfill and is proven to reduce CO2, and the usage of energy and raw materials. We are delighted to support Caroline in her expedition.”

The preservation of Antarctica and raising awareness of climate change has been a lifelong mission for the Expedition's organisers, polar explorer Robert Swan OBE and his son Barney, founders of the 2041 Foundation. The Madrid protocol, part of the Antarctica Treaty, prohibits mining in Antarctica for any reason other than scientific research.  However, the mining ban could be reversed as early as 2048 which would open up Antarctica for commercialisation and exploitation.  Ironically, as climate change takes hold and temperatures increase it may actually make mineral deposits, thought to be under the ice, easier to extract. 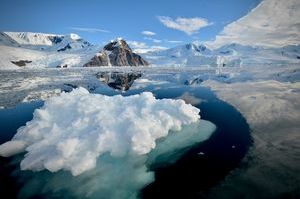 Caroline added: “The work of the BMRA to promote recycling of metals that are already in circulation is key for the ongoing sustainable use of materials and the fight against climate change. I am excited to have the opportunity to work alongside them, raising awareness of the need for recycling of our planet's precious resources and its value in preventing further destruction of our natural landscapes as well as reducing the carbon emissions from metal manufacture.”

Keep abreast of Caroline’s adventures on the expedition here: https://csmarriage.wixsite.com/2041

The British Metals Recycling Association (BMRA) represents the £7.5 billion metals recycling sector, which comprises an estimated 2,500 businesses and employs over 15,000 people. The industry trades and processes over 10 million tonnes of ferrous and non-ferrous metals every year, including: steel, aluminium and copper. On average, we export eight million tonnes every year: or 80% of all scrap arisings in the UK.

Scrap metals are secondary raw materials whose use reduces the demand for precious natural resources needed to make new metal compounds – such as iron ore in steelmaking; nickel in stainless steel; or alumina and bauxite in aluminium smelting.

For example, every tonne of recycled steel saves:

The 2041 Foundation was founded by polar explorer and environmentalist Robert Swan, OBE (Order of the British Empire), the first person to walk to both the North and South Poles. Swan has dedicated his life to the preservation of Antarctica through the promotion of recycling, renewable energy and sustainability to combat the effects of climate change.

It was Swan’s original expedition to the South Pole that was the inspiration for 2041, an organization he founded and dedicated to the preservation of the polar regions. The mission of the 2041 Foundation is to engage businesses and communities on climate science, personal leadership, and the promotion of sustainable practices.

In March 2022, 2041 will be sponsoring a number of young leaders to journey to a hotspot of climate change – the Antarctic – the place that nearly took Robert’s life some 35 years ago. The mission of the expedition is to utilise adventure as a vehicle to preserve our planet. It is important that people go to Antarctica to observe the changes that are happening so that they can return home and become advocates for this last great wilderness on earth!

Over the last 23 years, Robert Swan has led more than 4,000 people to the Polar Regions on various expeditions. No other individual has a stronger record of success and experience in leading ventures in the Polar Regions.