“I am overwhelmed to have been awarded an OBE” 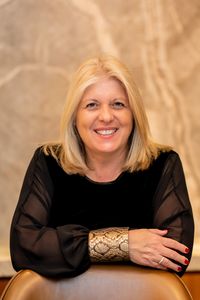 Susie Burrage, Managing Director of Buckinghamshire-based Recycled Products Ltd, has been awarded an OBE in the King’s inaugural New Year Honours in recognition of her services to recycling and to the environment.

Susie, 50, from Great Missenden, Buckinghamshire said she now planned to use the honour to “shine a light” on the important role the recycling industry has in our future, and to encourage a whole new generation of young people to join the sector.

She said: “I am overwhelmed to have been awarded this honour and proud that it is for services to recycling, which is requisite to the future of our planet.

“I dedicate this accolade to my family, past and present, who have supported me and encouraged me, especially my late father Tom, who brought me into this industry and encouraged me to take a seat at the boardroom table when it was predominantly men who were doing so.”

Robert Ellis, Operations Manager at Recycled Products Ltd, added: “Susie is the third generation of the Burrage family I have worked alongside, and I know her father and grandfather would be extremely proud. The team at Recycled Products and I are delighted that Susie has been recognised for her hard work and dedication to the recycling industry.”

A true trailblazer, in 2014 Ms Burrage was the first woman to be appointed to the board of the 100-year-old BMRA and became the association’s first female president when she was elected in 2016 - she has subsequently been re-elected for an unprecedented four times since.

She regularly promotes the environmental benefits of recycling in the media and at conferences worldwide, highlighting the importance of metal recycling in achieving net-zero targets.

Her influential position means UK metal recyclers are being represented on a global stage.

Through her roles at the BMRA, EuRIC and BIR, she represents recyclers at a European and International level. Susie works with lobbyists and policymakers across a range of issues that affect the industry globally, helping them work towards favourable outcomes for recyclers, thus ensuring more raw materials from recycling are available across the globe.

As an ambassador for the Global Recycling Foundation, Ms Burrage has encouraged many well-known faces to take part in social media campaigns to promote recycling on Global Recycling Day, held on 18 March every year.

Her role as a Patron of the Bureau of Middle East Recycling, the first woman to hold this position, helps to ensure the UK metal recycling industry continues its warm relationship with fellow recyclers in this important region and beyond.

Ms Burrage said: “I am the fourth generation of my family to own a metal recycling facility. I worked alongside my father before founding Recycled Products Ltd in 2001. It is since taking on my voluntary roles in the UK, Europe and beyond, that I have been able to get recycling’s positive messages out to a wider audience. I will continue with my endeavours to promote recycling until it gains the prominence it deserves as an essential ingredient in our transition to a circular economy.

“We all, as custodians of planet earth, have a duty to find ways to reduce our carbon footprint. Everyday recyclers play their part in helping to reduce CO2 emissions. They rescue essential raw materials by collecting, sorting, and processing our discarded waste. Be it metals, textiles, rubber, plastic, glass or paper or a combination there is a recycler with a solution.

“As a holder of prominent senior recycling roles, not only do I feel the responsibility to promote recycling and its environmental benefits, but to also encourage the younger generations to join our essential industry. I am very proud of all my achievements, especially the glass ceilings I have broken. Some of my proudest moments are when younger female colleagues from around the world have said I have inspired them.”

Ms Burrage added: “Huge thanks to my team at Recycled Products Ltd and the Associations for whom I volunteer and the secretariats who work tirelessly and shine a light on the extremely important and vital recycling industry.”