If it is metal, it can be recycled and made into new treasure - even gold and silver jewellery!

At the beginning of June, Danish Jeweller Pandora announced that, come 2025, all its jewellery would be made from 100 percent recycled gold and silver.

Commenting on the change, CEO Alexander Lacik said: “We wish to help develop a more responsible way of crafting affordable luxury like our jewellery and prevent these fine metals ending up in landfill. We want to do our part to build a more circular economy.

“The need for sustainable business practices is only becoming more important, and companies must do their part in response to the climate crisis and the depletion of natural resources. For many years, Pandora has used recycled metals in our designs. Now we are ready to take the next step and stop using mined silver and gold altogether.”

Currently, some 15 percent of the world’s silver supply – some 4,706 tonnes – is derived from recycled sources. 60 percent comes from industry where the metal is used in chemical production, electronics and so on. Another 28 percent comprises silverware, jewellery and coins. Recycled gold made up 35 percent of available gold, much of which came from jewellery and coins.

Unlike other metals, there are few problems when it comes to recycling silver and gold. “Silver is silver, and gold is gold. There is no difference in quality between virgin metals and recycled metals. Silver originally mined centuries ago is just as good as silver pulled out of the ground yesterday.”

The move to using 100 percent recycled gold and silver is part of Pandora’s aim to align itself with United Nation’s Sustainable Development Goals, including number 12, ‘Responsible consumption and production’, and number 13, ‘Climate Change’. The group says that stopping the use of newly mined silver and gold will cut carbon its emissions by two thirds for silver and by more than 99 percent for gold.

With 71 percent of the group’s gold and silver jewellery already coming from recycled content,

Pandora is certified according to the Responsible Jewellery Council’s Code of Practice. The company also works with its suppliers to ensure that all gold and silver in its products originate from responsible sources.

Although the largest consumer of silver in the industry, Pandora is not the only jeweller to use recycled metals. Arabel Lebrusan, for example, has used 100% recycled gold, silver and platinum for many of its pieces since 2008, while byBiehl has committed to making all its jewellery from 100% recycled gold and silver.

And it is not just jewellers who are aligning themselves with the United Nation’s Sustainable Development Goals and embracing sustainability more widely. 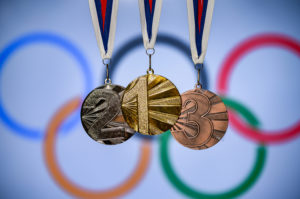 In a National project which took two years to come to fruition, all the medals for the 2020 Olympic and Paralympic Games in Tokyo (now to take place in 2021) are made from waste electrical and electronic equipment (WEEE), including smartphones and laptops.

In all, by recycling nearly 80,000 tonnes of WEEE collected both from the general public, businesses and industry some 32kg of gold, 3,500kg of silver and 2,200kg of bronze was recovered. This was then crafted into the 5,000 medals across the three different categories.

Recycling and sustainability is nothing new to the Royal Mint Either. Under its Coin Reclamation Programme, in 2013, the Royal Mint set out to remove 65 percent of cupro-nickel (CuNi) 5p and 10p coins and replace it with its aRMour mono-ply nickel-plated steel coins.

It estimated that converting all of the 5p and 10p coins from CuNi to aRMour mono-ply would avoid generating almost 200,000 tonnes of CO2 emissions. It states that the purity and size of crushed old coins makes them an ideal feedstock for melting – significantly reducing energy consumption when compared to melting virgin ingots.

Reassuringly, the old CuNi coins were completely recycled and used to make new coins or used in other applications with thousands of tonnes of high-quality metals being recovered. The new mono-ply coins are also recyclable at the end of their life and are used in the stainless-steel industry.

More recently, the Royal Mint minted some 1 million 50p pieces to commemorate Brexit on 31 October 2019 before production was halted due to Brexit being delayed. The coins, made from copper and nickel, had to be recycled. There will, however, still be a commemorative coin minted when the UK finally leaves the European Union.