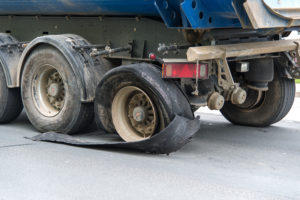 The image of a tyre carcass on the side of a highway is all too familiar a sight for road users and probably one which is relatable within this industry. Costly, dangerous, and incredibly inconvenient, having a blow-out is something all drivers and fleet owners dread and this risk is significantly higher in the scrap metal industry given the increased debris and puncture hazards encountered in scrap yards.

At the 2018 Commercial Vehicle Show Bridgestone and Highways England released the ‘Tyre Debris Survey’; an investigation they carried out on tyre debris on the UK roads. Their findings harnessed some interesting results; 56% of tyre failures were a result of punctures/road hazards, 18% due to poor inflation and 8% due to poor tyre maintenance. Among the tyres studied, the majority were found to be from commercial vehicle blow-out’s. Bridgestone and Highways England used these metrics to highlight that 26% of blow-out’s could be prevented with more careful attention to tyre pressures and maintenance. A metric the study failed to highlight was that up to 82% of commercial vehicle blow-outs could be prevented with the use of a new technology: ATIS (Automatic Tyre inflation systems). 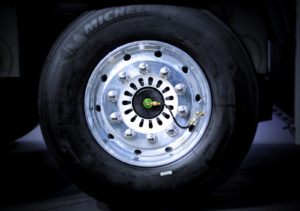 Although tyre pressure monitoring systems (TPMS) are relatively well known and adopted in the UK market, ATIS, which is currently available for commercial vehicle trailers is quickly catching up and becoming a more advanced solution for a number of UK fleet’s. Automatic Tyre inflation systems, unlike TPMS, actively re-inflate a tyre to optimum pressure when a drop is detected whether the vehicle is static or on the move.

ATIS fits onto a commercial trailer, it works by taking air pressure from the air suspension tank which is then fed into the control box where the air is regulated to the desired pressure (the control box can be set to whatever pressure is recommended by the tyre manufacturer). From the control box the pressure is then supplied to the axle beams, which in most cases act as an air conduit, the air is then fed through a stator to the wheel end where a rotary union and hose transfer the air directly to the tyre valve. Once the pressure in any one of the tyres on the trailer drops by 3psi, ATIS automatically starts to re-inflate the tyre.

ATIS not only prevents slow pressure loss over time; it also works to inflate a trailer tyre under extreme stress such as a puncture. If a tyre is punctured, the system will immediately notify the driver of a drop in pressure via a warning light fitted to the trailer behind the cab and the pump will kick in to maintain optimum pressure despite the puncture. A driver is then able to keep driving and plan the repair on the tyre into a scheduled break for the vehicle - avoiding any unplanned downtime.

Greyroads of Oswestry are specialists in recycled metal haulage and have been running the PSI automatic tyre inflation system on their fleet for over 3 years. Simon Yarwood, director of Greyroads cannot recommend the system enough, Simon recently provided us with a case study. One of 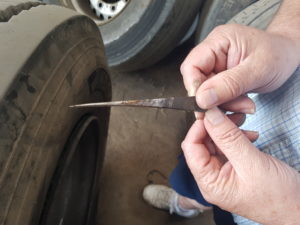 Greyroad’s trailers picked up a vicious looking 6 inch piece of metal which pierced one of the tyre walls. Despite the steel shard being embedded some 4 inches into the wall, the PSI system fitted to the trailer maintained the correct operating pressure keeping it safely on the road’. This image highlights the severity of the puncture and despite this ATIS managed to keep the tyre at optimum pressure for a further 3 days. As a result, the risk of a blowout was significantly reduced and therefore negated any safety risk to the vehicle itself and other road users.

Simon also went on to highlight the savings he has made in tyre maintenance from running the system, ‘the system has saved us £1000 minimum in maintenance per trailer each year, this is without factoring in other costs such as roadside call out charges’. In several cases Greyroads are able to have a punctured or worn tyre repaired as opposed to replaced because a blow-out is prevented and there was no side wall degradation as a result of underinflation. 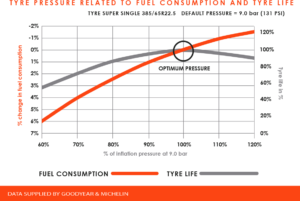 In addition to the benefits already mentioned ATIS also provides a significant fuel benefit to commercial vehicle fleets. A tyre which is underinflated by 20% leads to a 12% larger footprint on the road resulting in an increase in fuel consumption of 4% (Source: Michelin). ATIS maintains optimum pressure in tyres at all times eradicating this issue altogether.

Steve Page, Managing Director at Kingswood Pallets recently introduced the PSI automatic tyre inflation system to his fleet. He remarked ‘We have seen significant fuel benefits with the tyre inflation system fitted on our new trailers. On the same route from the UK to Germany we were seeing 10.4 mpg on our trailers without PSI, and with PSI we are now seeing 10.7 mpg– these routes were at the same time of year in the same conditions carrying exactly the same weight.’

Celerity DRS GmbH took over the distribution rights in 2017 for the PSI ATIS System in Europe. The PSI system is the world leading tyre inflation system with over 1.5 million systems in use worldwide and is compatible with all major European axle types. Visit the Celerity DRS website (www.celeritydrs.com) and contact the team to find out how PSI can benefit your fleet performance, economy and safety. Celerity DRS have been active service members of the BMRA since January 2018.